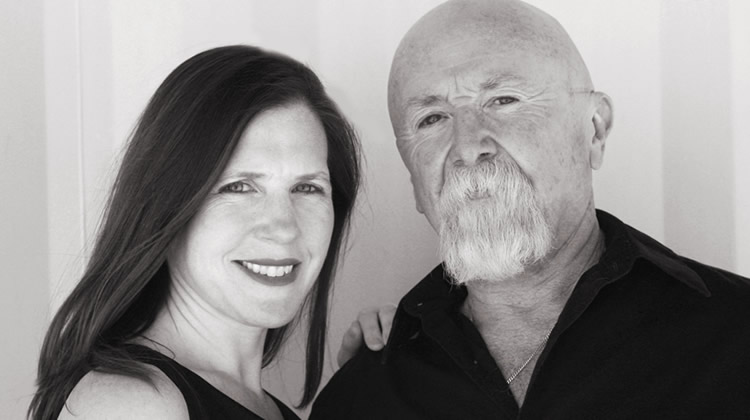 With the release of their fifth book, Hullabaloo! The Life and (Mis)Adventures of L.A. Radio Legend Dave Hull, the writing-editing team of Bill Hayes and Jennifer Thomas have created a titillating textbook on an important part of pop culture history and the pedigree of rock ’n’ roll.

Hullabaloo! is both Dave’s wild personal ride as he worked “up and down the dial,” as well as a crazed chronicle of the evolution of commercial radio from the 1940s to the present—all presented with a soundtrack-in-words that ranges from Tennessee Ernie Ford to the Beatles and beyond.

Dave first took to the airwaves on Armed Forces Radio in the early 1950s. From there, his on-air insanity took him from Roswell, New Mexico, to Ohio to Michigan to Florida and finally to the mass-market of Los Angeles. In L.A., “the Hullabalooer” rose to number one in the ratings and even higher than that in the hearts of young listeners.

His zany tales of broadcasting bedlam make for an amazing, entertaining, and just plain fun book!

I had the privilege of sitting down with Bill and Jennifer to dig into the marvelous mayhem of creating 600 pages of hullabaloo!

Q: How did you meet Dave Hull and how did the book project take off?

J: We met Dave through a mutual friend, the completely psycho J.J. Solari. J.J. was a writer for Easyriders magazine, as was Bill. J.J. was also one of the featured “characters” on Dave’s Lovelines show on KGBS and KMPC years ago. J.J. told us that Dave’s story simply had to be told—and he was right!

Q: It sounds like Dave is pretty much surrounded by humor and wackiness.

B: Absolutely! Humor and wackiness are his trademark! They are what made him so successful. He is so proud of the fact that he never had to slide into the “shock-jock” category to maintain an audience—although his Lovelines show did get “hotsy-totsy” from time to time!

Q: There are some comments at the beginning of the book that indicate this was definitely a labor of love for you two, not just another book.

B: There is definitely a lot of love in this book. I was there when Dave was number one in L.A. I listened to him on my old AM car radios—we all did! It was that humor and the wackiness and the fun. It was the Beatles and the Stones and the rock ’n’ roll that not only changed the emotions and attitudes of American youth but in many ways it changed the world. And Dave Hull was right in the middle of it!

Q: The book contains many rare photos and graphics. Evidently Dave kept everything!

J: He sure did; and that made designing the book a lot of fun—and of course, a lot of work! We went through boxes of archival material. We came across original menus from his Hullabaloo night club, copies of the KRLA Beat newspaper, every issue of his fan club newsletter, autographed Beatles pictures, a script from The Monkees television show that Dave appeared on, tapes of his old shows, and so much more. It was like the storage areas at the Rock ’n’ Roll Hall of Fame! His fan club president, Linda Thor, also entrusted us with her original old-timey construction-paper scrapbook that she created for the fan club. We put as much of everything that we could into the book! Of course, if we had put everything, it would have been twelve hundred pages instead of just six hundred!

Q: Talking about the Beatles, Dave was called the “Fifth Beatle,” right? Why?

B: Well, he was a part of them here on the West Coast. KRLA management made him the president of their fan club, and he constantly broadcast “inside information” about them on his shows—like their personal addresses and phone numbers!

J: Yes, he had a top-secret insider (you have to read the book to find out who!) who always gave him the inside scoop. The Beatles never figured out how he knew so much!

B: Dave did spent time with the Beatles in person too. He spent a few weeks with them in the Bahamas while they were filming the movie, Help! And one time, he stowed away on their jet to Denver. Way back at the beginning, he helped Bob Eubanks to bring them to L.A. for their first West Coast concerts at the Hollywood Bowl and Dodger Stadium. He truly was the Fifth Beatle!

Q: And the Beatles and their legacy is still so popular and vital…

B: Absolutely! Just the other day a copy of the album Sgt. Pepper’s Lonely Hearts Club Band signed by all four Beatles sold for nearly three hundred thousand dollars at an auction in Texas. Beatlemania lives on!

Q: And so does Dave Hull…

J: So does Dave Hull! Dave finally retired from radio in 2010, but the buzz caused by this book resulted in him coming back! He returned to the airwaves with “Dave Hull & Mandy,” on Saturday, March 30 on CRN Digital Talk radio. The show, which airs from 2 to 4 p.m. Pacific each Saturday, features Dave teamed with popular radio personality Mandy Armstrong. Both worked at KWXY-FM in Palm Springs. And our old pal, J.J. Solari, will also be on the show! After a nearly sixty-year career, “the Hullabalooer” is back, and his wild life story has finally been written!